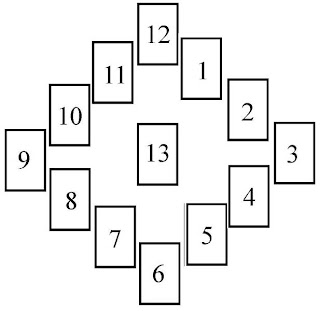 The Astrological Spread of the Tarot is a spread that has many different variations. It uses thirteen cards, usually laid out in a circular fashion. Some Tarot readers are not familiar with this spread, but it can be one of the most interesting Tarot spreads to decipher.

Preparing to Lay Out the Astrological Spread

As with other spreads, the Astrological Spread should be laid out neatly on a black cloth. This is often the same cloth the cards were wrapped in, and serves to protect the cards. It also becomes a ritual for the reader, and should be done the same way each time the cards are read, regardless of the spread used.

Focusing on the current situation, the individual should shuffle the cards. For this spread, both the Major Arcana and the Minor Arcana are shuffled together. This shuffling continues until the reader is satisfied that they have been shuffled appropriately.

All seventy-eight cards of the Tarot should be spread in a fan-shape, face down. The individual may then pick a total of thirteen cards, which are positioned, in the order they are chosen, in the Astrological Spread.

The Positions of the Astrological Card Spread

Each of the thirteen positions of the Astrological Spread has a specific meaning. The positions and their meanings are:

The Astrological Spread is more complex than many of the spreads used by Tarot readers today. It tends to be best suited to those people who have a working knowledge of astrology and the zodiac, or at least are interested in these things. It is a complicated spread with great potential.
Posted by The Random Writer at 8:00 AM